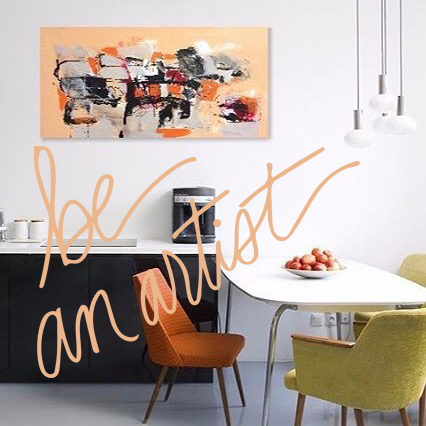 60/100 || Friday I had the chance to go and see my friend, Angela Craven, share her artwork via First Friday in Arvada at Vouna. I met Angela when she was working as a UX designer and dreaming about being able to make her art her full-time work. She was able to do just that this past fall and since then it has been amazing to watch her not only shine but really embrace her life and being as an artist. As her friend, I’ve noticed that her spirit has become so much more playful as she has been able to embrace doing something that she not only loves, but is so good at doing. Being able to watch a friend become more playful can be contagious! For me, it has been a beautiful example that when you follow a path that is true to your being, you are met with not only opportunity but a flow and ease. While Angela talks about the struggles she has as a new business owner, as an observer it is so obvious that she is doing the work that she is meant to do. ⠀

Observing her in her element on Friday was an interesting way to participate in my 100 Days of Playful Being for The 100 Day Project. It was more about watching someone in a playful mode, embracing their authentic being. We all have witnessed it – seeing someone genuinely living a playful and open life. It is an added bonus when it is a friend! ⠀

I also had the chance to talk to another artist who was there and he was telling me a bit about his artistic process. It just confirms my notion that we all need to be the artist of our own lives. Taking risks, making mistakes, not getting too attached to an outcome, putting your work out into the world in all shapes and forms, being vulnerable and open to feedback. I feel that artists are somewhat naturally playful because the creative process demands it. You have to be open and willing to play with your ideas in order to create. Thank you, Angela, for being a living example of this! ⠀