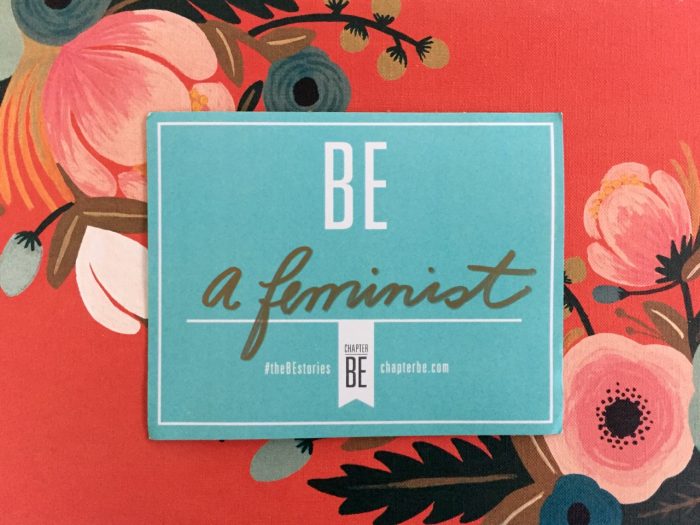 I knew I was a feminist before I knew there was a name for it.

Perhaps it was because as long as I can remember I had two parents who told me that I could do anything that I set my mind to and worked hard at – never once bringing my gender into the conversation.

Perhaps it was because I grew up surrounded by strong women who modeled for me that using your voice was a good thing, not a bad thing.

Perhaps it was because I had four sisters, and with no brothers in the picture there was no delineation between a girl’s role vs. boy’s role in the house. We did everything – and therefore learned that we could do anything.

Perhaps it is because I was born at a time in our country’s history when we had examples of women being able to make a choice – and it was hard for me to imagine an alternative.

So, when I was given the word feminist – it was a sense of relief that I finally had a word that so succinctly encapsulated my feelings and beliefs. There was no moment in time where I contemplated whether or not I wanted to be identified as one, but an instinctual knowing that I was one.

Feminism helped me build a framework around how I wanted to live my life. It made me want to learn everything I could about the women who came before me and the women who had been forgotten in that fight. It instilled in me a confidence to live the life I wanted to live, while also working to make sure everyone had the same opportunity to do the same.

Yet in that learning, it also made me acutely aware that there were people who saw this word as dirty, unnecessary, and wrong. People who actively fought against it. How could anyone argue against the political, economic, and social equality of the sexes?

In entered the anger, rage, and doubt. In entered the understanding that not everyone saw inequities as injustices. In entered the knowing that there were many who would not meet the label of feminist with the same open heart and mind.

Before starting Chapter Be I did some writing for another website – not much, just ten pieces. One of those ten pieces was on feminism, and it was the ONLY piece out of the ten that received any comments. All negative. It was not a popular website – you would have to really be looking to find the articles. It became clear that these commenters were trolls. People who were specifically looking for anything written about feminism on the Internet, so that they could argue against it and start fights online.

I knew when I started Chapter Be that I wanted it to be a place of positivity and community. So, I decided not to write about anything that might be deemed as too political or controversial. But over the last year, holding back on writing about things that are important to me, felt like I was not being entirely honest or true to my being.

So, I slowly started to bring in aspects of feminism – and low-and-behold on an Instagram image where I posted a picture of me wearing a shirt that said “Feminist,” I received a comment from a complete stranger that said, “KYS.” I had to look up what “KYS” meant, as I was clueless to the fact that it stood for “kill yourself.” Confirming that the trolls are alive and well.

If I can thank the incoming president for anything, it is that this time around I refuse to let the trolls stop me. The 2016 election reignited my feminist flame, and reminded me that complacency and fear have no place in this fight. It was the slap in the face that I needed to remind me that women have yet to achieve political, economic, and social equality in this country. President Obama was a beacon of light and hope, but the fight within us cannot die.

We need feminism now more then ever. We need to support all women in this fight – not just the women that look like us. We need to lift one another up and listen to each other’s lived experiences – because we have to understand our past in order to not repeat it. We need each other – because we cannot do it alone. Sisterhood is powerful.

I’m committed in 2017 and beyond to keep fighting for the political, economic, and social equality of the sexes, because without equality we cannot be our true selves. Join me, will you? Be a Feminist.

Be Rebellious
Lesson from a Young Marcher